* You will receive the latest news and updates on your favorite celebrities!

FG has not shown compassion to flood victims – Peter Obi

2023: I Saved Atiku From Obasanjo, Rescued Ribadu From Yaradua – Tinubu

Mystery Behind The Xbox Controller

5 Ways Animals Will Help You Get More Business

Orange House Is A Green House. Say What?

Former aviation minister, Chief Femi Fani-Kayode has reacted following a really that was held in Ibadan on Wednesday. The APC chieftain described the rally as a pitiful show for Peter Obi.

He wrote “A pitiful show for Peter Obi in Ibadan. Truly pitiful. It was not a rally, it was a joke. Out of respect for our revered father Baba Ayo Adebanjo, the leader of Afenifere, who graced the gathering with his respected presence, I will say no more than that”

The Labour Party rally which held in Ibadan on Wednesday was a very big one. It was attended by the leader of the Yoruba socio-cultural group, Afenifere. The event also gathered thousands of people as they came out to show their support for the Labour Party presidential candidate. Femi Fani-Kayode believes otherwise as he describes the event as a ‘pitiful show’. He stated that it didn’t look like a rally as he called it a joke. 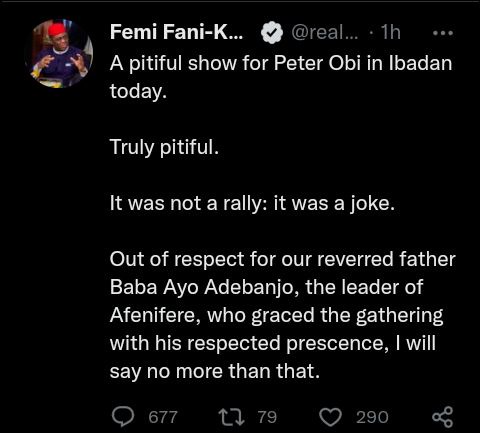 Recall that Chief Femi Fani-Kayode was formerly a member of the People’s Democratic Party just like Peter Obi. For their respective reasons, they have both left the PDP. And Femi Fani-Kayode who is now in APC is now a supporter of Tinubu.

If You don’t want problems and Criticisms, You will be Dead before you Die- Pastor Kumuyi Warns

Drama as two prostitutes beat up a man in UK (Video)